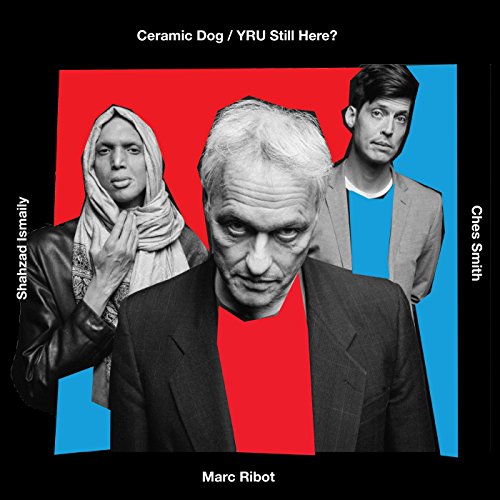 “I got a right to say FUCK YOU!!!” is how the new album from veteran guitarist Marc Ribot’s trio Ceramic Dog starts off, with Ribot howling in anger at corruption, tyranny, life in general, and nothing in particular. If you’ve got a serious case of outrage fatigue, Ceramic Dog’s explosive cocktail of balls-to-the-wall abandon, chameleonic disregard for style constraints, political commentary, and absurdist humor is just the shot in the ass (or kick in the arm?) you might need. In fact, Ceramic Dog’s new album — whose title:YRU Still Here? is directed in equal parts at themselves, the commander in chief, and the listening public — arrives just in time to remind us that now is a moment when anger is not only necessary, and unavoidable, but also good for houseplants.

YRU Still Here? careens from punk to funk to flamenco to surf to rock ‘n roll — all turned on their heads and smudged, allowing us to imagine an alternate history where punk icons Jello Biafra and Ian MacKaye fronted no-wave lounge bands on alternate Tuesdays at the Teaneck New Jersey Holiday Inn.

Thanks in no small part to the fire, brimstone, and dextrous facility summoned by kindred spirits Shahzad Ismaily (Secret Chiefs 3, Will Oldham) on bass and drummer Ches Smith (Xiu Xiu, Secret Chiefs 3, Trevor Dunn’s Trio Convulsant), YRU Still Here? comes to the table armed with more than just sloganeering rhetoric. Alongside his monumental career forging his peerless guitar style with the likes of Tom Waits, John Zorn, the Lounge Lizards, etc, Ribot has also worked for decades as a tenant union, labor, and artist rights activist, where he mastered the agit-prop skills used to such dazzling effect on sure-fire hits such as “Fuck La Migra” and “Muslim/Jewish Resistance.”

“Pennsylvania 6 6666” documents Shahzad’s experiences growing up Muslim and Outrageous in Danville Pennsylvania, where “all the children are insane”: rendering these lamentable memories in a cool vaguely Latinoid jazz style all their own (while providing guffaws for Satanists and Glenn Miller fans)!!! By way of explanation, Ribot comments: “Yes, we too are subject to the post-modern condition, although we actually see it as a kind of psoriasis.”

As much as it is a rallying cry, though, YRU Still Here? also further consecrates Ribot’s 10 years of music making with Ismaily and Smith. Referring to them as his “musical conscience” and to the band as a “family…although not always in a good way”. Ribot comments wryly: “Even after all the playing I’ve done, there’s something about this group that still manages to shock me.”