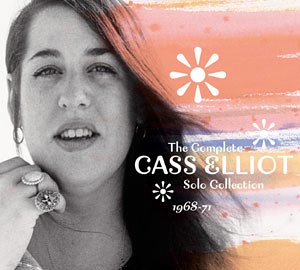 Of all the Mamas and Papas, Cass Elliot was the best poised for solo stardom. After all, she had That Voice, and a command of musical styles reaching back into Tin Pan Alley. And while she was the first of the band out of the chute with a solo album, she sort of eased into it with the other Mama and Papas backing her on “Dream A Little Dream Of Me.” In the three years she was a solo artist for ABC/Dunhill, she released two albums (Dream A Little Dream Of Me and Bubble Gum, Lemonade And… Something for Mama, later retitled Make Your Own Kind Of Music) and a handful of singles, all of which are included on The Complete Cass Elliot Solo Collection 1968-1971. During our excursions in the vaults, we came across three tracks that had never been released in any form: Cass’ cover of Joni Mitchell’s “Sisotowbell Lane,” a version of John Sebastian’s “Darling Be Home Soon,” and the Cashman, Pistilli & West tune “For As Long As You Need Me.” They are revelatory, and stand proudly with anything Cass released. Cass’ daughter, Owen Elliot-Kugell, contributed notes for the release and participated throughout the project. Rock historian (and Hip-O Select go-to guy) Richard Campbell performed copious feats of discographical and biographical research in support of his extensive liners, and all the tracks were newly mastered from the original tapes by Erick Labson of Universal Mastering West. Also, props to photographer Henry Diltz for finding such great photos of Cass; the package really looks as good as it sounds.