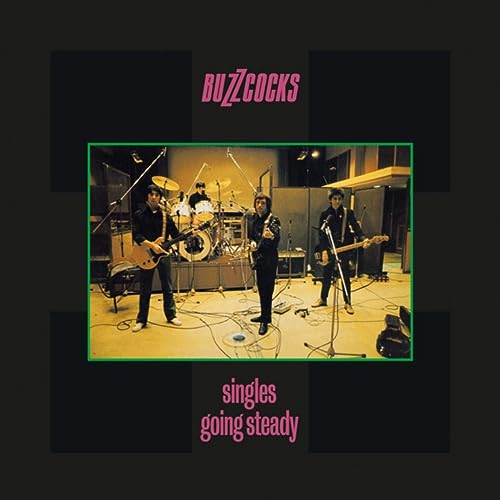 If Never Mind the Bollocks and London Calling are held up as punk masterpieces, then there’s no question that Singles Going Steady belongs alongside them. In fact, the slew of astonishing seven-inches collected on Steady and their influence on future musicians – punk or otherwise sometimes even betters more famous efforts. The title and artwork alone (the latter itself partially inspired by the Beatles’ Let it Be) have been parodied or referred to by Halo of Flies and Don Caballero, which titled its own singles comp Singles Breaking Up. As for the music, anybody who ever combined full-blast rock, catchy melodies and romantic and social anxieties owes something to what the classic quartet did here. The deservedly well-known masterpiece “Ever Fallen in Love” appears along with Love Bites’ “Just Lust,” but the remaining tracks originally appeared only as individual A and B-sides, making this collection all the more essential. The earlier numbers showcase a band bursting with energy and wicked humor – the tongue-in-cheek “Orgasm Addict,” details the adventures of a sex freak with a ridiculous fake orgasm vocal break to boot. However, the slightly more serious but no less frenetic singles are equally enthralling. “What Do I Get?” with its pained cry about lacking love, the deeply cynical “Everybody’s Happy Nowadays” and Diggle’s roaring “Harmony in My Head” are just three highlights on an album made of them. The final songs show the band incorporating their more adventuresome side into their singles, as with the slower, very Can-inspired “Why Can’t I Touch It?,” the semi-jokey stop-start thrash “Noise Annoys,” and the Murphy’s Law worries of “Something’s Gone Wrong Again.”