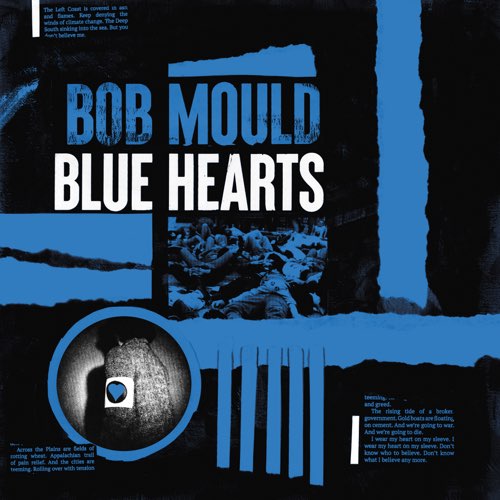 Mould’s new album, Blue Hearts, (which comes a little over a year since 2019’s Sunshine Rock) isn’t going to the bellwether of the times. It’s not going to be what most people think of when revisiting the cultural shoving match that’s only going to escalate into God knows what before 2021. Perhaps it’s the soundtrack to a thoughtful, indie documentary? Maybe. It’s good enough, passionate enough and perhaps necessary enough.

Thoughtful fervor delivered with volume has been Mould’s speciality since the days of Hüsker Dü, rhe wonderfully influential trio from Minneapolis that Bob Mould led as a closeted gay man while a popular president pandered to the religious right and turned a blind eye to the explosion of AIDS. The methodology of Blue Hearts isn’t new ground for Mould, nor is Neil Young rushing out a half-baked single after 9/11. Mould sounds like he took a deep breath, considered his feelings, then let it loose with a barrage of familiar guitar rock—still hovering near the pinnacle of what was once called alt-rock.