Posted by Green on December 12, 2019
in folk-rock, singer-songwriter 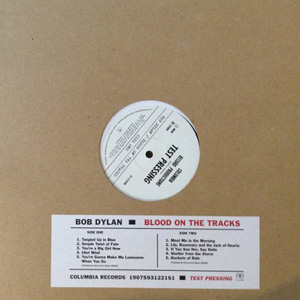 After spending less than a week at New York’s A&R Recording Studios with producer Phil Ramone in 1974, Bob Dylan thought he was done with Blood on the Tracks. Test pressings of the new album went out to critics, but at the last minute Dylan changed his mind and re-recorded half the songs in Minneapolis, Minnesota. The New York pressing has been widely bootlegged over the years, and many fans believe it’s the superior version of the album. The complete New York sessions were released on the exhaustive More Blood, More Tracks box set in 2018, but this is the first time that original test-pressing version of the LP has ever been officially sold on its own.

A1 Tangled Up In Blue
A2 Simple Twist Of Fate
A3 You’re A Big Girl Now
A4 Idiot Wind
A5 You’re Gonna Make Me Lonesome When You Go
B1 Meet Me In The Morning
B2 Lily, Rosemary And The Jack Of Hearts
B3 If You See Her, Say Hello
B4 Shelter From The Storm
B5 Buckets Of Rain