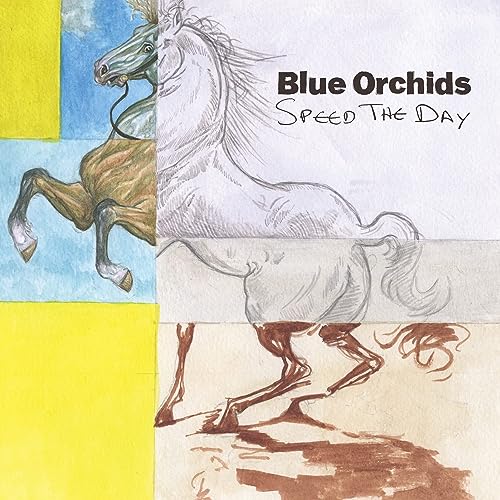 Tim Burgess of The Charlatans hosts Tim’s Twitter Listening Party on Saturday evenings, where he chooses an album in advance and the show’s followers simultaneously click ‘play’, listening in tandem while sharing anecdotes, impressions and criticisms of that week’s choice. It’s not uncommon for the artists themselves to pop up and interact with fans, a welcome diversion while we’re all bottled up at home. Tim’s recent choice of Blue Orchids’ The Greatest Hit (Money Mountain) was no random one – the album’s influence on The Charlatans is palpable, though the album remains one of rock’s greatest obscurities. So one week after Susanna Hoffs turned up to talk about The Bangles, it was no surprise to see Blue Orchids founder Martin Bramah arrive and announce himself, only to mysteriously disappear in seconds, for the duration of the show. And thus it has been with Blue Orchids. Tantalising, brilliant songs appearing out of nowhere, an album arriving, only for Martin to take unannounced leave for years, without explanation. So it’s a miraculous turn of good fortune that Blue Orchids have released as much new material in the last five years than in the thirty-six (!) years before that, even if you include Blue Orchids-buy-any-other-name combos like Thirst and Factory Star into that equation. The sterling quality and wit of those releases remains undimmed since the beginnings of the band back in 1980. Speed The Day retains the classic line-up from the last two albums’ line-up and adds electric ukulele player Tansy McNally, hailing from Australia and adding a different psychedelic lacquer to an impassioned set of nine new songs, pls an oddly paranoid cover of Chicago’s 25 Or 6 To 4, which slyly mutates lyrics about late-night songwriting into a paean to speed. (Although your interpretation may vary!) An far darker and more energetic album than The Magical Record Of Blue Orchids, their album of obscure garage covers, Speed The Day is a sterling addition to the the canon of Martin Bramah masterpieces.