Posted by Green on September 25, 2020
in bluegrass, country
as Bill Monroe & The Bluegrass Boys 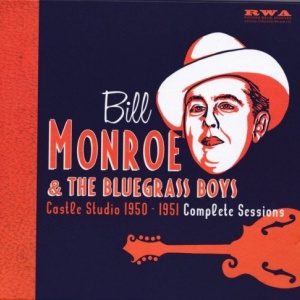 For devotees of Bill Monroe’s music, the CD box sets issued by BEAR FAMILY beginning in 1989 were the answer to a listener’s dream: having the bluegrass originator’s complete recordings tastefully collected in boxes, with informative books included. What we now have is something even more dreamlike: all the familiar Monroe recordings for DECCA in 1950-51, featuring lead singers Jimmy Martin, Carter Stanley, and Edd Mayfield, presented next to – unbelievably – all the outtakes (none previously issued) of all the tracks. Among other things, this means multiple takes of “Raw Hide”. For musicians and careful listeners who have studied that spectacular recording for years, it’s as though a new set of Stone Tablets has been found. It also means the “tape blip” we’ve always tolerated in The First Whippoorwill is now corrected, as the previously issued take was from a faulty tape dub whereas the “new” 1951 version is from the original master. Accompanying this gold at the end of the rainbow is a revised discography by Neil Rosenberg, and notes by Dick Spottswood (edited by Rosenberg) with recollections by Monroe fiddler Charlie Smith.