Posted by Green on November 15, 2019
in british folk, jazz
as Bert Jansch 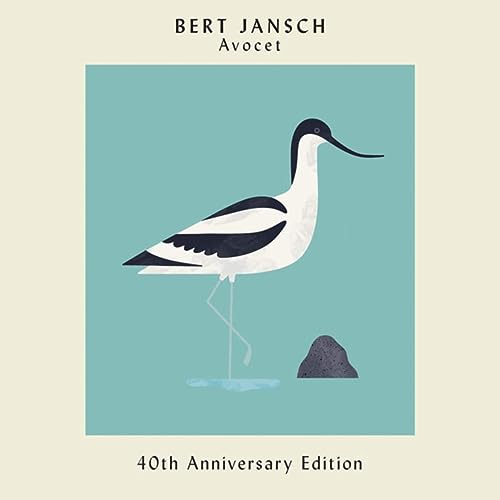 At once bucolic and urbane, Jansch’s 12th studio long player (originally released in 1979 and reissued in 2015) is rated among the guitar legend’s personal favorites. It’s easy to see why, as it splits the difference between the tenacious progressivism of his early, post-Pentangle offerings and the stateliness of his later work. Working with ex-Dando Shaft multi-instrumentalist Martin Jenkins, with whom he had spent much of the previous year touring Scandinavia as a duo, and bolstered by ex-Pentangle bassist Danny Thompson, Jansch’s signature amalgam of traditional English folk and American blues and jazz has never sounded more fluid. As the all-instrumental set’s long-legged wetlands bird-inspired title would suggest, Avocet’s avian theme looms large over the proceedings. The nearly 20-minute title opener/title track, which uses the oft-covered English folk song “The Cuckoo” as its base of operations, serves as the centerpiece, and what an impressive piece it is; skillfully weaving in and out of folk and jazz motifs like waterstriders on a placid country pond, with occasional bursts of free-form riffing that erupt like the violent leap of a hungry fish. The plucky “Kingfisher” sees Jenkins’ brassy violin playing cat and mouse with Jansch and Thompson’s percussive picking, while the simple yet somber piano-driven “Lapwing” and the sprightly closer “Kittiwake” present opposite ends of the pastoral landscapes that Jansch, Jenkins, and Thompson manage to so effortlessly invoke throughout the LP’s perfectly balanced, just-under-40-minute runtime. Like his wizardly six-string contemporary John Renbourn, Jansch was a mercurial figure who was often at odds with both himself and the world around him. However, Avocet presents an entirely different picture. It’s knotty, beguiling, playful, and occasionally brazen, but ultimately light as a feather.