Posted by Green on January 5, 2020
in country, western swing
as Asleep At the Wheel 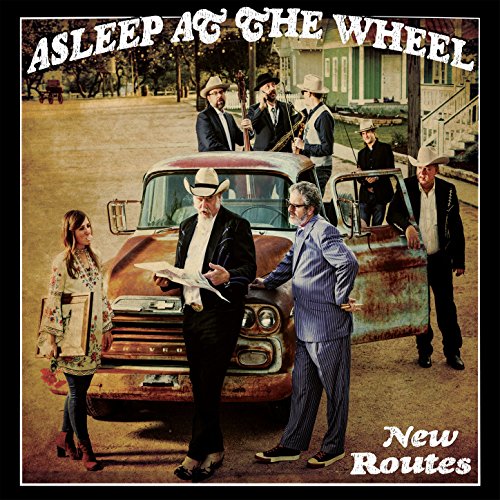 On Friday, Sept. 14, Asleep at the Wheel will release ‘New Routes,’ (Thirty Tigers) its first new material in over a decade, embarking on a new chapter in the group’s 48 year history with a fresh group of musicians and nimble musical palette. The 11-track collection of both new and familiar country, jazz, jump blues, rockabilly, Western Swing and folk, offers a blend of originals, vibrant covers, superior musicianship, and a guest vocal appearance by Seth and Scott Avett of The Avett Brothers.

‘New Routes’ travels down myriad musical byways from the sly “viper” jazz groove of the album’s opener, “Jack, I’m Mellow” to the languid original ballad, “Call It A Day Tonight;” the Cajun romp of “Pass the Bottle Around” to the Americana-tinged acoustic cover of Guy Clark’s “Dublin Blues;” and the pedal-to-the-metal covers of Paolo Nutini’s “Pencil Full of Lead” and Moon Mullican’s “Seven Nights To Rock.”

For the first time since the 80’s, Benson co-wrote with a member of the Wheel for the record. “Call It A Day Tonight” is co-penned with fiddler and recent band addition, Katie Shore. The Ft. Worth, TX, native follows in the long tradition of strong and talented women who have been an integral part of the band’s identity for decades. From founding vocalist Chris O’Connell to Mary Ann Price, Rosie Flores, Cindy Cashdollar, Elizabeth McQueen and Emily Gimble, female vocalists and musicians have shaped the band’s legacy.

Benson has been the one constant in Asleep At the Wheel since the band’s inception in 1970 in Paw Paw, West Virginia. Since that time, more than 100 musicians have passed through the Wheel, but Benson remains the front man and the keeper of the vision. In the process, the band has released more than 25 albums, earned 10 Grammy awards, an Americana Music Association Lifetime Achievement Award, Academy of Country Music Award, Austin City Limits Hall of Fame induction, and racked up millions of miles on the road.