Posted by Green on July 5, 2019
in blues, country-rock
as Adam Holt 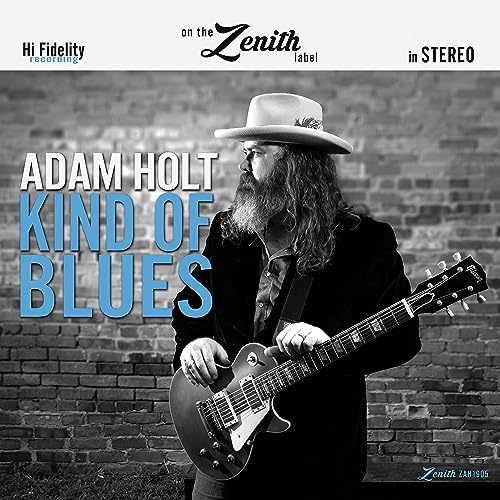 Country rock instantly sends your mind to the Eagles and Byrds (circa Sweetheart of the Rodeo), but on Kind of Blues, singer/multi-instrumentalist Adam Holt serves up a broader interpretation of the concept, delivering country rock songs that are both heavy and poppy.

Holt comes from Alabama, which for many will conjure sonic images of the famous Muscle Shoals sound, which is restrained rock that swings just enough to catch your ear. Holt’s guitar playing and production aren’t flashy, but he doesn’t hide his guitar. These are muscular songs that determinedly march toward a goal.

Holt’s voice is similarly powerful. His vocals are soulful, with a rich, resonant tone. There’s a sadness to it, too, but also an emotional distance. It juxtaposes nicely against his guitar playing, which can be expressive, without sounding dull. Together, the contradictory forces—sadly staid vocals and wildly restrained guitar playing—make for a solid country sound.

Holt has a nice pop sensibility, too. Taylor Swift might not be covering any of these songs, many of which were written with his wife, singer-songwriter Jillian Holt, but the melodies stick with you. “Mr. Morning Drive,” the lead-off track, has a Pointer Sisters energy and a Clapton-esque guitar solo. The song is about Holt’s grandfather, a long-time radio DJ. It’s a catchy song, but given the personal nature of Holt’s connection to the subject, it would have been nice for him to dig deep lyrically, perhaps getting into the death of radio and how his grandfather might have felt about the changing industry.

One of the album’s best songs is “The Bourgeoise,” a bluesy shuffle that’s a commentary on social mobility and the viability of trickle-down economics, with a chorus of “I go to work for the bourgeoise / My mama said they’d take care of me / That’s how I live so comfortably.” Like “Mr. Morning Drive,” the song’s lyrics don’t feel very personal, but his vocals have a wry detachment that makes it feel like you’re listening to a smart, funny friend crack wise at the bar after work.

Kind of Blues also has some unexpected jazz moments. “Before I Trusted You” is one of the album’s harder rocking tracks, with a nice guitar riff and an anthemic chorus. But it features a surprising jazzy guitar solo that somehow works perfectly in a straight-ahead rock song. The jazz also appears in “The End,” an old-fashioned blues with very pretty organ and lovely jazz-inspired guitar runs. The song gallops like it’s straight out of the 1950s, but the power and presence of Holt’s voice feels very contemporary.

Holt’s crafted a solid album. The production is flawless and the songs are all well-executed. He’s a talented singer and musician. There’s no denying any of that. However, it would be interesting to hear Holt take more risks. Nothing on the album ever feels ragged or dangerous and sometimes that’s what the listener wants to hear. Country, especially contemporary country, often has a reputation for precision, and Holt nails that. But there’s something about someone with chops—vocal, musical, or otherwise—going someplace unexpected. Obviously, there’s always risk involved with taking chances. But Holt has enough musical tools to land on his feet if things were to somehow go sideways. I’d like to see him land on his feet on his next album.