Posted by Green on October 13, 2021
in country, folk
as Adam Carroll 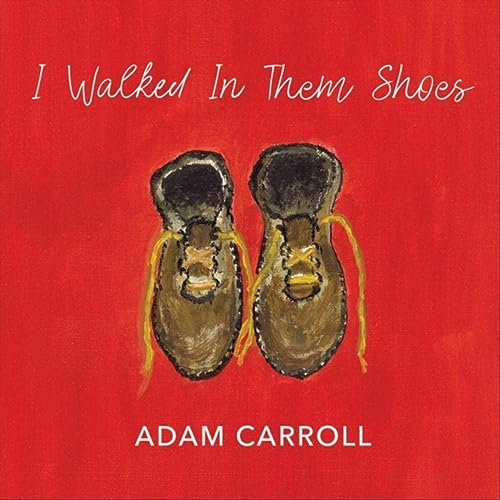 Adam Carroll is a highly respected Texan songwriter, now releasing both his ninth, and tenth album this year, 2019. Good Farmer, an album he recorded with his wife, Chris Carroll, is being released next month, but before that you can check out I Walked In Them Shoes, recorded with some help from Lloyd Maines and Pat Manske.
These songs on this particular album were all recorded in one session, and Adam’s spoken introductions give them a definite demo feel which works to good advantage here. It’s hard to go wrong with simple arrangements, sparse decoration, and a ‘vocals up front’ mix, and it also helps if the songs are as solid as these are. I doubt that a fuller arrangement on any of them would add anything, so why tamper with purity?
“Iris and the Lonesome Stranger” is a familiar story told well, while “My Only Good Shirt” could be a song about passing the torch of songwriting and musicianship along.
“Crescent City Angels” takes inspiration from New Orleans, but it’s the title song that got my attention the most. “I Walked In Them Shoes” eschews a traditional arrangement, and Carroll’s vocal take leaps over the finger-picked guitar runs throughout. This is definitely the most rock ‘n’ roll song on the album, fueled by attitude, a sincere feeling of accomplishment, and learning to roll with the punches.
There’s been comparisons of Carroll to songwriters such as Guy Clark, John Prine, Townes Van Zandt, and others, (Some even say he’s the best Texan songwriter ever. I’m not gonna go there, because Alejandro Escovedo has pretty much all of them beat!) but mostly these tunes remind me of lesser known songwriter Bob Frank’s best ones, though Carroll is assuredly less dirt floor than Frank, and probably not as barefoot either. What I do hear is Carroll’s gift for imbibing these songs with a genuineness of emotion and sincerity. He’s not as edgy as Townes, nor as funny as Prine, but he does has a gift at storytelling, and enough solid melodies to keep it interesting.