Posted by Green on September 22, 2020
in folk, singer-songwriter
as Ad Vanderveen 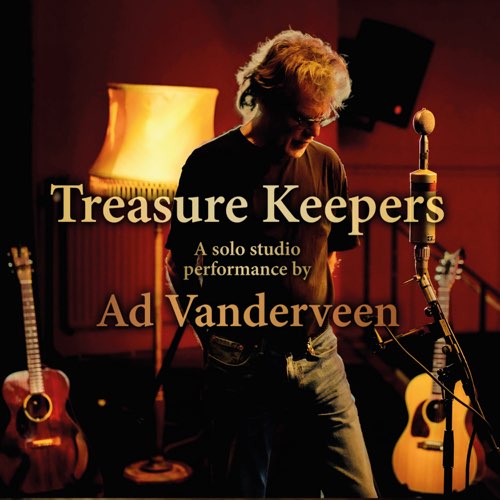 After I wrote the songs for my 2019 album Final Refuge there was a six month silence. As is often the case following a creative outing I start to think it has been my last. And Final Refuge would have made a perfect closing indeed, if it hadn’t been for January 19th, when the news hit from Nashville that my revered colleague, mentor and friend David Olney had suddenly passed away. In the following days of processing the huge impact of this news it was like I got kicked in gear and gained access to the regions of the muse again, listening to words that came to me in a seemingly dictated poetic meter and rhyme and: get to write! It’s what I do. At this stage I don’t pick up an instrument until I hear in my head what the song wants and then let it play itself out. In the time that follows it’s like a well has been drilled and a pressure is hit that has been building, more songs start to flow, one after another. Treasure Keepers is a dedication to David and the song itself started with a memory of the last conversation I had with him about the process of songwriting; we both agreed it’s a profound spiritual process resembling prayer. I envisioned us as treasure keepers, with a mission to find, nurture, and guard the precious gifts of poetry and creativity. This is what this record pays tribute to; the song, the core, the pure reason it is there. While I’ve often heard myself say ‘a song should be able to stand on its own two feet’, I’d never really made a record like that. It was time to practice what I preach: one shot on the spot with no overdubs – a bold and daring choice if I do say so myself – and if a song wouldn’t stand up to it, it simply wouldn’t come to life. It took a sense of ruthless vulnerability to present my new material in this way. It was certainly tempting to add other sounds and players to the palette, be it out of insecurity, or simply the joy of interaction. But these songs and recordings became a world to be immersed in, with room for silence and imagination, and joy of reading between the lines. Working these bare basics had its own challenges and choices, like finding and working the right combination of instruments, microphones, acoustics and ambience, in order to get a sound and production that felt musical, complete and inspiring. While the lyrics and poetry remain central, the musical framing brought variation and ranges from clear and airy acoustic to grungy electric sounds. Next it took Bert van der Wolf at Northstar Recording with his expert knowledge of high-end audio post processing to bring things home with mixing and mastering. So while this is a very spontaneous and minimal record, the music has been surrounded with the greatest care available in the audio field. To my ears we achieved and created an atmosphere and soundscape that enhances the feeling and meaning that’s inside the songs of Treasure Keepers. We hope it will speak to you and look forward to meeting down the road in good health and spirit. AV June 2020.